Edit
Welcome to the Suguri Wiki

Suguri is a 2D horizontal shooting game series spanning two main games and two spin-off fighting games by independent game developer Orange-Juice. The first game SUGURI and its spin-off, Acceleration of Suguri (X-Edition) have been localized by indie game publisher Rockin' Android. These two games have also been greenlighted on Steam as the "Suguri Collection".

The second game in the Suguri series "sora" has been published by Fruitbat Factory and is available on Steam.

This wikia offers general information on the games of the Suguri series and includes strategic advice on the stages, boss battles and weapon usage. 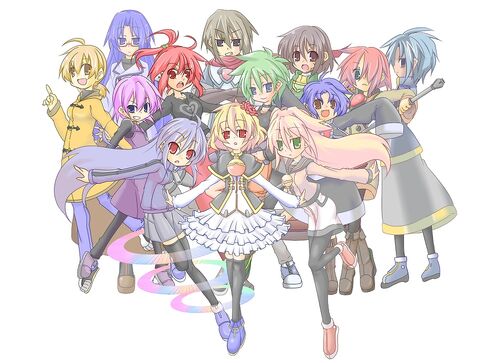 Want your community included? See how!

Cameos and references to Suguri games and fangames.

A freeware fangame of SUGURI by KvLW . It uses characters of the popular doujin STG series Touhou and has gameplayer reminiscent of both the original SUGURI and the Touhou games.

A freeware fangame of Acceleration of Suguri by KvLW using Touhou characters like in パチュリ.

A freeware fan game. It is a platformer and a crossover. Suguri, Sora, Nanako, and Hime are playable characters. There is also an extra stage boss battle against NoName.

There have been many unofficial manga from the doujin community. For a partial list see Suguri Manga.

An audio CD by the voice actor of Starbreaker. It can still be purchased on the English DL site.

There have also been garage kit Suguri figurines, and there are even videos with 3D models of Suguri on niconico video. Fans have also cosplayed as Suguri characters at conventions (and some were male). Fans have also released remixes of the Suguri OST.

All images on this wiki originate from game screencaps or their official websites and are the property of Orange-Juice. The background image is a free stock photo (c)Tomo.Yun (www.yunphoto.net/en/).
Community content is available under CC-BY-SA unless otherwise noted.
Advertisement